Fauquier Housing Corporation (FHC) was founded in 1970 by Maximilian Tufts Sr., Roland Tapscott, and John Wayland in direct response to the growing need for affordable housing in their community.

Fauquier Housing was established at a time when 1 in 5 occupied units in Fauquier County lacked some or all plumbing facilities. Some of the first projects Fauquier Housing completed involved providing community wells in neighborhoods that previously had no or poor access to running water.

In 1971 the organization issued a report titled “Where Poverty Lives” and concluded:

“Fauquier county doesn’t have the worst housing condition in the state of Virginia or in the nation. Its problems, however, are representative of the housing crisis that stretches from the Atlantic to the Pacific and strikes hardest at the lower income families that do not share in the economic wealth and political power of the area of the country they live in.”
– Fauquier Housing Services Program, 1971

Building on the foundation laid by its founders Mr. Tufts, Mr. Wayland, and Mr. Tapscott; Foothills Housing remains committed to meeting the needs of the people and environment it serves.

Our History Through The Years

Fauquier Housing Corporation began as a three year housing program within Community Action, a non-profit human service provider. During the first year of the housing program, a three bedroom home for the Rector family was constructed. The home received “Gold Medallion” certification for its all-electric construction and marked the beginning of the organization’s goal to help 30 families in its first year (Fauquier Democrat, 1970).

While still working closely with Community Action, Fauquier Housing Corporation addressed the water needs of low income homeowners by digging deeper, larger wells. These larger community wells replaced small, hand-pumps in communities that previously had little or no access to water (Fauquier Democrat, 1971). In addition to its work on the ground, FHC worked behind the scenes to raise awareness and garner support for the provision of affordable housing. In a 15 page report titled “Where Poverty Lives,” the organization outlined the challenges facing low income folks in Fauquier County and the changes that needed to be made to adequately address these issues.

In 1978 the local newspaper featured a multi-part series on the poor in Fauquier County. Housing was highlighted as one of the largest issues facing low-income residents. The article went on to describe that much of what contributes to sub-standard housing conditions is a lack of basic amenities like running water and plumbing (Fauquier Democrat, 1978). On the supply side, FHC faced challenges in their efforts to meet the growing “shortage” of low cost housing. One of the barriers that made it diffi cult to access funds was the wealth disparity within the county. With a median income level higher than the state average, the county was deemed ineligible for some federal funding. At the same time, the higher cost of living and abundance of high cost housing associated with this high median income greatly increased the need for funding that could provide housing at levels the lower and middle class could afford (Fauquier Democrat, 1978).

After 15 years in the county FHC began to gain real traction providing the physical and financial needs for better housing. An article describing one of the successes ofFHC, touts its work as “fulfi lling the American Dream” (Fauquier Democrat, 1985).

What the article does not discuss however, is the inherent tension in affordable housing: Is housing a dream or a right? For many low income folks, the “American dream” consists of little more than being able to turn on a faucet to access clean water, or access a bathroom without going outdoors. Without these basic housing services other “dreams,” dreams of education, jobs, and savings accounts, quickly fade into the background. Providing houses like the modular home described in this article is not so much an act of fulfilling dreams, as allowing them to exist.

“[A] decent place for a family to live becomes a platform for dignity and self-respect and a base for hope and improvement. A decent home allows people to take advantage of opportunities in education, health and employment – the means to get ahead in our society. A decent home is the important beginning point for growth into the mainstream of American life.”
-Report of the National Housing Task Force 1988 in a Right to Housing, Bratt, Stone & Hatman, 4

It’s hard to imagine but in 1986 outhouses remained a way of life for county residents that could not afford indoor plumbing. Often times older homes were passed down through generations to heirs that simply could not afford to update and maintain the aging homes. In a county with variable seasons, including sometimes harsh, long winters, indoor plumbing quickly became, and remains, a strong part of FHC’s work in affordable housing.

“You wouldn’t think that people still use outdoor privies or that a lack of running water still exists in a rich county like Fauquier but it does.”   -Herbert Guerrant, FHC Executive director, 1986

In 1992 executive director Michelene Hostetter, of Fauquier Housing Corporation sat on a task force created to examine the state of affordable housing in the county. Among the members of the task force was a shared feeling that a range of housing was needed to offset what was quickly becoming a homogenization of high cost housing in the county (Fauquier Citizen, 1992).

“many of [our] clients have jobs but must spend 70, 80, or 90 percent of what they make on housing.”
-Stefanie van Gulden, Fauquier Family Shelter

One step toward meeting the demand for affordable housing was to provide housing to those that needed it the most- the elderly. The Oaks represented a large victory for FHC – fulfilling their mission of safe, decent, affordable housing with the provision of 96 rental units for seniors, who as an accompanying advertisement stated, “could hardly wait to move in” (Fauquier Democrat, 1996).

“Just as protecting natural resources, wildlife habitats, farms, and forests leaves a land legacy for future generations, the built environment should also be designed as the next great historic neighborhood. The affordable housing should be well built as well as low-cost. Housing for low and moderate-income residents should neither be shabby nor second-rate but rather built to last.”
-Briechle, 2006 in Conservation based affordable housing

After land that Fauquier County had acquired was deemed unsuitable for its intended use as a landfill it was determined that the land be used for affordable housing. The plan, which featured FHC and Habitat for Humanity as the housing developers faced opposition from a few, powerful individuals and organizations in the area. A local soil scientist, donated $24,000 for the “challenge” of finding water on land where companies had determined there was none. After finding an abundant source of clean water, and receiving a Community Development Block Grant, the Botha plan slowly began to solidify (Fauquier Democrat, 1996).

After providing housing in the county for nearly 30 years, the local paper interviews two of FHC’s orginal founding members, John Wayland and Roland Tapscott. The two men discuss how the organization was started. Describing his reasons for getting involved in fulfi lling the county’s “need” for affordable housing Tapscott patted his heart and stated, “it has to come from within” (Fauquier Democrat, 1999).

“A bunch of us got together in the early ‘60s to do something about desegregation, and from that came the Human Relations Committee…We wanted to improve living conditions.”
-co-founder Roland Tapscott

Fauquier Housing Corporation’s 30th year was bittersweet. The celebration of what the organization accomplished coincided with the 2000 census, which highlighted all that had yet to be accomplished in the county. Summarizing the results of the census, FHC pointed out to county residents that the need for indoor plumbing and housing rehabilitation was still very much present, over 200 homes in the county still lacked basic water and plumbing systems (Lomax, Fauquier Democrat, 2000).

“we’re not looking to do big, tract-style developments…what we want to do is small, model projects around the county… we want to show how this can be done.”
-Executive Director M. Hostetter

In a discussion on the state of low cost housing in Fauquier County, the County Supervisor Harry Aherton stated, “making affordable housing possible in Fauquier County is a moral obligation.” Executive Director of FHC, Michelene Hostetter, discussed how the average price of a home in Fauquier County (ranging from $200,000 to $400,000) was responsible for pushing long time residents out of the county creating a “bedroom-community” where the majority of residents spend their time, working outside the county and have little time left to devote to community involvement (The Fauquier Democrat, 2001).

Five years after the first Oaks was opened FHC opened the Oaks II, providing 15 additional units of low-cost senior citizen housing for existing Fauquier senior citizens. The low cost and high quality of the Oaks, quickly made it a model for senior housing in the state.

“it’s independent living but without the snow shoveling and cleaning the gutters.”
-Mrs. Reid, Oaks Resident 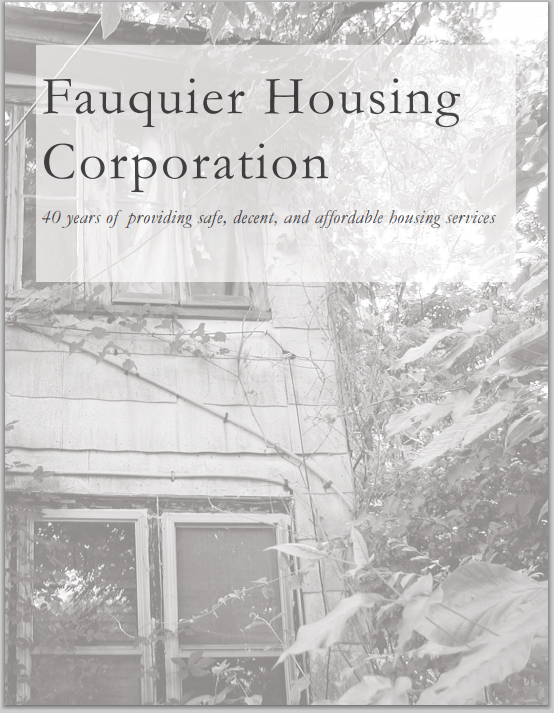 Documents are in pdf, if they do not open click here to download free version of adobe pdf reader